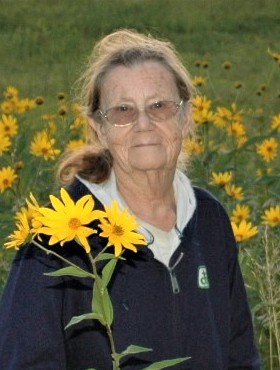 Please share a memory of Violet to include in a keepsake book for family and friends.
View Tribute Book

Funeral service will be held 10:30 a.m. Wednesday, March 24, 2021 at the Henderson-Barker Funeral Home in West Liberty. Visitation will be held Wednesday from​​​​​​ 9:30 until 10:30 service time at funeral home. Burial will be in the Inland Cemetery, Bennett, Iowa. Online condolences may be made to the family at www.hendersonbarkerfuneralhome.com. A memorial fund has been established.

Violet was born January 14, 1927 in Cedar County, Iowa the daughter of Lewis and Carrie (Joenk) Mussig. On January 23, 1954 she was united in marriage to Alva Thomas Proctor in Rock Island, Illinois. Violet farmed and assisted with the Bulldozer business alongside her husband, land in Cedar and Muscatine Counties and worked part time many harvest seasons at Pioneer Seed Corn, Durant, Iowa.  Violet's passions were gardening and cheering for her boys at wrestling meets.