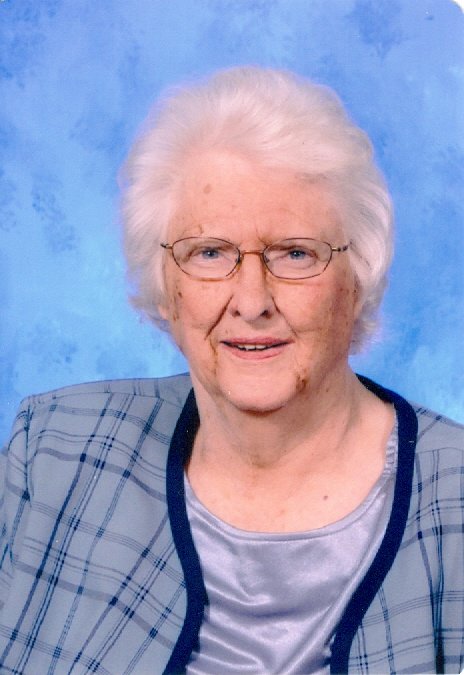 Please share a memory of Justine to include in a keepsake book for family and friends.
View Tribute Book

Funeral service for Justine Gertrude Owen, 92 of West Liberty will be held 11 A.M. Thursday, January 21, 2021 at St. Joseph Catholic Church in West Liberty. Visitation will be Thursday from 9 until service time at the church. The use of masks and social distancing will be requested. Burial will be in the North Prairie Cemetery, West Liberty. Online condolences may be made to the family at www.hendersonbarkerfunerahome.com. The funeral mass will be can be seen via live stream on the Henderson Barker Funeral Home Facebook page. In lieu of flowers Memorials in Justine’s name may be made to St Joseph’s Catholic Church, West Liberty, Simpson Memorial Home, West Liberty, or a charity of the donor’s choice.

Justine died on January 18, 2021 at Mercy Hospital, Iowa City.  She had been a resident of Simpson Memorial Home since 2017.

Justine Gertrude Owen was born October 23, 1928 to Albert and Marie (Bremhorst) Witte in St. Paul, Iowa.  The third of five children, she was raised near St. Paul, Iowa.  She was a 1946 high school graduate of West Point, Iowa and 1950 graduate of Mercy Hospital nurses training in Burlington, Iowa.

As a nurse she worked at the Iowa Ordnance Plant, Burlington, Mercy Hospital, Burlington and Veterans Administration Hospital, Iowa City.   Also, 12 years as a school nurse for the West Liberty Community School District.

Married to Don Owen of West Liberty on April 28, 1956, at St James Church in St. Paul, Iowa  Justine continued to work at the VA Hospital for one year.  While raising their children, Justine was a school nurse and taught First Grade catechism at St. Joseph’s Catholic Church, West Liberty for 16 years.   She organized and helped serve many funeral dinners for St Joseph’s Church and was a member of the North Prairie Social Club for over 40 years.

She enjoyed gardening, flowers, canning and raised chickens, selling fresh country eggs to many people.  Also played bridge and enjoyed family dinners.  Justine and Don enjoyed being with their family and attending their grandchildren’s activities.

Justine is survived by two sons and two daughters and their families.  Janet (Martin) Stimson, of Center Point, Iowa.  Bob (Geri) Owen, Jeff Owen and Karen (Kevin) Schemmel all of West Liberty.  Also, four grandchildren, Michael Owen of Iowa City, Matt (Hannah) Owen of Omaha, Alyssa and Nathan Schemmel of Coralville.  A great-granddaughter, Lainey Owen was born in May 2020 to Matt and Hannah Owen.  Also surviving is her sister, Maurine Kokjohn of Alabama.   Preceding her in death were her husband in 2017, parents, 2 brothers and 1 sister.

TO VIEW A POWER POINT PRESENTATION BY JUSTINE'S CHILDREN CLICK LINK BELOW:

Share Your Memory of
Justine
Upload Your Memory View All Memories
Be the first to upload a memory!
Share A Memory
Send Flowers
Plant a Tree