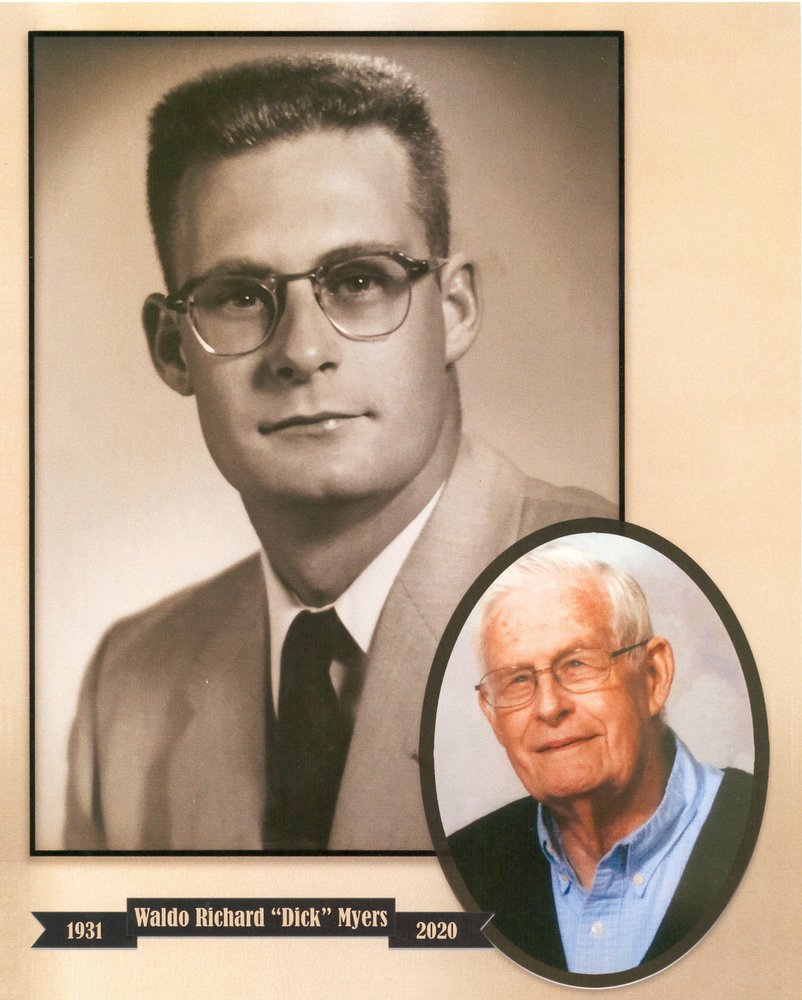 Please share a memory of Richard to include in a keepsake book for family and friends.
View Tribute Book
Waldo Richard (Dick) Myers, 89, passed away on November 30, 2020 at the Simpson Memorial Home in West Liberty, Iowa. Private family Rite of Christian Burial will be held 10:00 A.M. Friday, December 4, 2020 at St Joseph's Catholic Church, West Liberty Fr. Guillermo Trevino, Jr. of St Joseph’s Catholic Church officiating. The funeral service will be live streamed and can be viewed on the Henderson-Barker Funeral Home Facebook page. Burial will follow at North Prairie Cemetery north of West Liberty. The Henderson Barker Funeral Home, West Liberty is caring for Dick’s family. Online condolences may be made to the family at www.hendersonbarkerfuneralhome.com. Memorial donations may be made to St. Joseph Catholic Church, 107 West 6th Street, West Liberty, Iowa 52776 or West Liberty Rescue Unit, 109 East 2nd Street, West Liberty, Iowa 52776. Dick was born in Cicero, Illinois to Waldo and Angela (Nelson) Myers on April 4, 1931. He went to high school at West Liberty and graduated in 1949. On October 18, 1952 he was united in marriage to Kathleen Sievers in West Liberty. He worked as a salesman for three monument and memorial companies in West Liberty and Iowa City for a period of over 50 years. He and his wife Kathy were charter members of the West Liberty Golf and Country Club which he worked to help build and improve over his entire life and where he spent much of his free time especially Wednesdays and Sundays with his good friends or with Kathy in husband and wife events. He also participated in the Eastern Iowa Golf Association competitions during which he recorded his only hole in one. Dick was an avid pheasant hunter which he enjoyed with his two sons and close friends every Sunday afternoon in the autumn. He seldom needed a second shot to take a bird. He was an avid fan of the Brooklyn/Los Angeles Dodgers, the Green Bay Packers and the Iowa Hawkeyes. He was a loyal member of the West Liberty Lions' Club where he achieved perfect attendance for many consecutive years and participated in its efforts to improve global eye health. He was a lifelong member of St Joseph's Catholic Church in West Liberty and spent much time with Kathy raising funds for a new building during the early 1950’s after the church burned in the 1946. Dick was president of the North Prairie Cemetery association for over 40 years and on the board of the West Liberty Parks. He was selected as the Rotary outstanding senior of the WLHS class of 1949. For 68 years he was married to his wife Kathy during which time they were seldom apart. They enjoyed much golf together, playing bridge with friends and travelling to visit their sons and grandchildren which always included much food around a big table. Over their time together they visited much of the United States, Europe, United Kingdom and liked to spend time in the spring at Gulf Shores in Mississippi and Alabama. In retirement Dick enjoyed and seldom missed daily coffee with lifelong friends either in downtown West Liberty or at the community center. Dick was an accomplished sales professional in the monument and memorial industry. His personality and demeanor were singularly suited to earn the trust of the bereaved as they often went through the difficult process of procuring a memorial for a loved one. Clients often shared their most intimate memories of their loved ones with him, some of whom later became a broader circle of friends. Dick is survived by his wife, Kathy of West Liberty, two sons, Mike Myers (Jenny) of Lisbon, Iowa, Tom Myers (Sherry) of Ballwin, Missouri, sister Margaret Felling (Charles) of Iowa City, Iowa, brother Joe Myers (Dinette) of West Liberty, grandson Scott of Chicago Illinois, granddaughter Elisabeth Myers of Dallas, Texas, grandsons Paul Myers of Kirksville, Missouri, Nick Myers of Rolla, Missouri, and Alex Myers of Rolla, Missouri. He is preceded in death by his father Waldo, mother Angela and sister Jean Reddin.

The funeral service will be live streamed 10 A.M. Friday on the Henderson-Barker Funeral Home Facebook page.