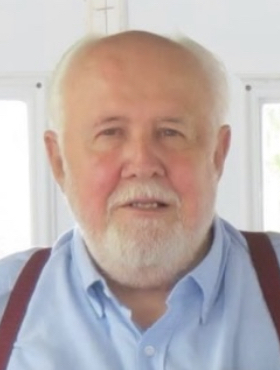 Please share a memory of Stanley to include in a keepsake book for family and friends.
View Tribute Book
West Liberty, Iowa Stanley Clark Hale, 78, passed away Saturday, November 21, 2020 at Mercy Hospital in Iowa City. Due to Covid there will not be a services at this time. The Henderson-Barker Funeral Home in West Liberty is caring for Stan’s family. In lieu of flowers please make donations to the West Liberty fire department. Online condolences may be made to the family at www.hendersonbarkerfuneralhome.com. Stanley was born October 26, 1942 in Burlington, Iowa the son of Ellis and Jean (Allen) Hale. After graduating from Denmark Academy, Stan joined the Navy as a Radarman 1st Class on the USS Cunningham 1960-1964. On September 20, 1964 he was united in marriage to Jean Ella McCrabb in Keota, Iowa. Stan worked for 50 years in the electronic field designing for many top corporations. In 1992 he started his own company, Macon Transformers & Coil, which is still in operation. He was an avid NASCAR fan and gun enthusiast. He is survived by the love of his life, wife, Jean Hale of 56 years. Three children: Don (Margie) Hale of L'anse, MI, Nic (Cass) Hale of Granby, MO and Doug (Alicia) Hale of West Liberty, IA. Seven grandchildren: Sean (Cheyenne) Hale, Madison Kleier, Ryan Miller, Hunter Kleier, Tatum Hale, Scott Hale, Hazel Hale, two great grandchildren: Rhea Guidry, Kacelynn Hale. Also surviving is a niece: Bev (Ralph) Mercer and many other special nieces and nephews, Jeans sibling that Stan very much thought of as his own: Richard (Sharon) McCrabb, Bill (Gail) McCrabb, Jan McCrabb. He was preceded in death by his parents, siblings: Ila (Sonny) Petty, Joann (Herb) Hasenclever, Shirley (Wayne) Lee, Max (Norma) Hale and a brother in law: Jim McCrabb. He will be dearly missed by his loving family and friends.

No Services are Currently Planned.

Share Your Memory of
Stanley
Upload Your Memory View All Memories
Be the first to upload a memory!
Share A Memory
Send Flowers
Plant a Tree