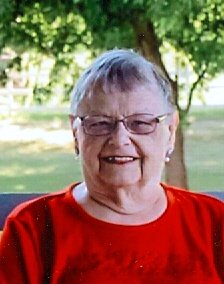 Please share a memory of Shirley to include in a keepsake book for family and friends.
View Tribute Book
Shirley Ann Helble Frauenholtz, 85, passed away Friday, September 25, 2020 at Mercy Hospital in Iowa City. Funeral service will be held 10:30 A.M. Wednesday, September 30, 2020 at the Henderson-Barker Funeral Home, West Branch. Visitation will be held 4 to 7 P.M. Tuesday at the Henderson-Barker Funeral Home, West Branch. The family requests in lieu of flowers, memorial donations be made to the West Liberty Food Pantry or the West Liberty Fire and Rescue Unit. Online condolences may be made to the family at www.hendersonbarkerfuneralhome.com. Shirley was born February 24, 1935 at Clinton, Iowa the daughter of Wesley U. and Doris E. (Cousins) Helble. She was raised on a farm in Scott County and graduated from Clinton High School in 1952. She was employed by the Scott County ASC Farm Office. On March 4, 1952 she was united in marriage to Robert Frauenholtz at the McCausland United Methodist Church. They became parents of two children Bill and Susan. Bob and Shirley farmed west of West Liberty for 60 years. She had been employed by Ditmars and Kerr after their marriage. Shirley was a life member of the Methodist Church, where she taught Sunday School for many years. She was a volunteer at the Simpson Memorial Home where she led the Sunday morning Christian Fellowship for several years. She was a lifelong Democrat, she and Bob held caucuses in their home for two elections. Shirley enjoyed gardening, canning, cooking, baking, shopping, craft shows, playing cards, games, birds, cats, Iowa Hawkeyes, Michigan Wolverines, but most of all her family came first. She loved being a farm wife, mother, grandmother and great grandmother. She enjoyed the family Sunday dinners and following her families activities. Following Bobs death she moved to Heath Manor, where she enjoyed her many friends and activities. Shirley is survived by her two children: Bill (Michelle) Frauenholtz and Dr. Susan Frauenholtz, two grandchildren: Hillary (Brady) and Adriane (Jake), great grandson Cael Scott, sister in law Shirley (George) Frauenholtz and many nieces and nephews. She was preceded in death by her husband Robert, sister and brother in law: Phyllis and Don Dumar, infant sister Donna Mae, several brother and sister in laws, one nephew and one niece.
Tuesday
29
September

Share Your Memory of
Shirley
Upload Your Memory View All Memories
Be the first to upload a memory!
Share A Memory
Send Flowers
Plant a Tree