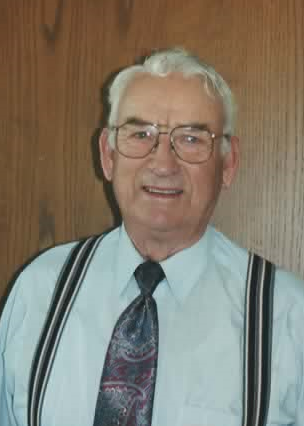 Please share a memory of Roscoe to include in a keepsake book for family and friends.
View Tribute Book

Roscoe Lewis Newton Millett was born June 1, 1922 to Lee and Ada Millett on the family farm near Springdale, Iowa.  He lived nearly his whole life under the giant oak tree which marked the home place and came to represent the strength and beauty of the life he led.  He died peacefully on April 2, 2020 in the loving care of the Crestview Specialty Care staff, with family at his side.  His body was deeded to the University of Iowa College of Medicine.

A visitation will be held at the Henderson Barker Funeral Home in West Branch on Saturday, May 29th from 9:00 to 10:30 AM.  This will be followed by a celebration of life service at the West Branch Friends Church at 11:00 AM with a luncheon immediately after.

The youngest of six children, Roscoe was put to work milking cows, plowing with horses, and looking after the livestock, including a few goats, and his pet mule, Jerry.  He developed what he termed “farm boy resilience” after being kicked in the head by Jerry, narrowly escaping serious injury.

Roscoe was a 1940 graduate of Springdale High School.  In 1941 he enrolled at William Penn College (now Wm. Penn University) where he met Helen Maxwell of Earlham, IA.  They were married in June, 1945 and enjoyed 71 years together.  In 1944 Roscoe enlisted in the Navy and was stationed in Pensacola, FL.  After his service, Roscoe and Helen returned to the family farm, where he partnered with his brother Ray in the farming operation until Ray died in 2014.  Together they raised a quality herd of black angus cattle.

Roscoe delighted in his daughters Elaine, Gwen, and Marilyn, and could have been the original “Girl Dad”, loving them unconditionally, making sure their bows were tied just right, and their shoes were polished.  He was abundantly blessed with his six grandchildren and seven great-grandchildren, who received his unfailing support in all their various life pursuits and travels.  He especially enjoyed their musical talents, which he and Helen cultivated early on, and was a big fan at their sporting events.  Roscoe enjoyed bowling throughout his life and continued bowling with senior friends to the age of 96.

Education was very important to Roscoe and over the years he committed to this by serving on the West Branch School Board as well as the Wm. Penn University Board of Trustees, serving both as president for many years.  In recognition of this service, he was awarded with an honorary degree as Doctor of Humane Letters in 1991.  More recently Roscoe helped to support the 2019 bond issue in West Branch by promoting it in the community and getting out the vote at Crestview.  He was a lifelong fan of the WB Bears and the Iowa Hawkeyes and he continued to support local students by his attendance at sporting events until his health no longer allowed.

As a birthright Quaker, Roscoe faithfully served the church his whole life.  He served on various committees in his beloved West Branch Friends Church and continued to lead pre-worship singing there until shortly before his death.  He regularly assisted with church services at Crestview.  Roscoe loved music and encouraged and nurtured musical gifts in his family members.  He will be remembered for his gift of whistling which he shared generously, his sense of humor, his community service and his gift of being a friend to all he met.

Memorials may be directed to Wm. Penn University for the Millett Family Endowed Scholarship.

Memorials may be directed to: Wm. Penn University for the Millett Family Endowed Scholarship

Share Your Memory of
Roscoe
Upload Your Memory View All Memories
Be the first to upload a memory!
Share A Memory
Send Flowers
Plant a Tree