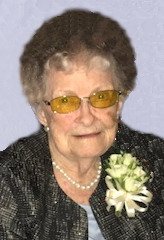 Marcella was born February 17, 1924 in Ames, Iowa the daughter of John T. and Ferne Foster Blair. She was a graduate of West Liberty High School in 1941. On June 22, 1944 Marcella was united in marriage to Lawrence B. Gow.

She had been employed with Sears, served as a secretary to Roy J. Carver in Muscatine and Farmland Industries. Marcella enjoyed square dancing, quilting and painting landscape scenes.

She is survived by two children: Tom (Janis) Gow of Greer, South Carolina and Cyndi (Pete) Spinden of Columbia, Tennessee.  Also survived by brother Marvin Blair of West Liberty. She had 5 grandchildren and 4 great grandchildren.

Share Your Memory of
Marcella
Upload Your Memory View All Memories
Be the first to upload a memory!
Share A Memory
Send Flowers