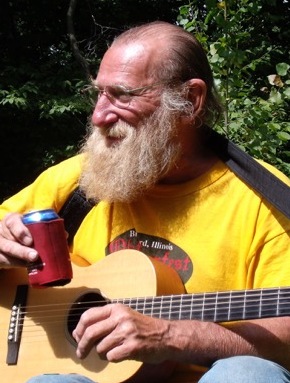 He loved music, motorcycles, and Mexico. So much that he rode his Triumph from Iowa to Acapulco in the dead of winter—twice! He loved the lilting Mexican polkas that combined his biological German/Bohemian roots with his chosen Mexican roots, so he learned to play the accordion. He had a way with words and prided himself on his ability to out-pun anyone! He only wished he could have learned to pun in Spanish.

John was born in Long Island, New York and moved back home to Iowa with his parents, John and Edith Cobeen Jenks, before his third birthday. He had two younger siblings, David Jenks and Susan Jenks Gaffey, both of whom are hanging out with him now on the metaphorical other side. On his 27th birthday he met Monica Leo and spent the next fifty+ years with her in a quirky but happy marriage. Their son John Raymond is a vibrant personality and a loyal friend.

John (aka “Brother John”) was a skilled carpenter and construction worker. In addition to contributing to buildings all over Iowa City, he built his dream house, a log cabin in the woods, almost singlehandedly. He built countless puppet sets and stages and brought a West Liberty building back from wrack and ruin to create Owl Glass Puppetry Center. His hangout was his workshop, where he entertained friends, kept an impressive collection of Mexican religious art, mostly devoted to Our Lady of Guadalupe, and, in his later years took to salvage, taking discarded items apart, selling the metal for scrap, and pulling out unusual parts to make whimsical outsider art.

In addition to John Jr and Monica, John is survived by his nephew, Matthew Jenks, his brother-in-law, Michael Gaffey, sister-in-law Darla Jenks, and by a large family by marriage: nieces, nephews, cousins, in-laws, in the US, Canada, Central America, and Europe.

No immediate funeral or visitation are planned, but a celebration of life (a party for John!) will be held Saturday, May 11, 3 to 7 PM at Owl Glass Puppetry Center, 319 N. Calhoun, West Liberty, Iowa. All friends are welcome; bring a story or a dish to share if you'd like!

Memorilas May Be Made To:

Save the Children Border Crisis: https://www.savethechildren.org/us/what-we-do/emergency-response/historical-emergencies/us-border-crisis
Share Your Memory of
John
Upload Your Memory View All Memories
Be the first to upload a memory!
Share A Memory
Send Flowers