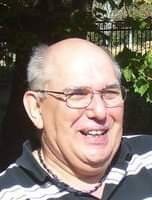 David C. Baker, 68, passed away Tuesday, December 25, 2018 at the University of Iowa Hospitals and Clinics in Iowa City.

David Christee Baker was born September 16, 1950 the son of Kenny and Shirley (Christee) Baker. He was a graduate of West Liberty High School in the Class of 1968 and attended Iowa State University Culinary School. On January 28, 1978 David was united in marriage to Roberta McGlumphry at Our Redeemer Lutheran Church in West Liberty. He had been employed with GPC in Muscatine for many years. Following the death of his sister Annette, David and Roberta became wonderful parents and gave much love and guidance to their nephew Brian.

He was a member and Past Master of the Mt. Calvary Masonic Lodge #95; as well as many other offices in the lodge, First Church United, Toastmasters, former member of West Liberty City Council and led tours at Herbert Hoover Presidential Site. David was very active in community volunteering; being a part of Volunteer Action West Liberty Food Pantry and preparing Christmas Boxes. He enjoyed cooking, riding his bike, playing the organ, watching Jeopardy, and listening to Hank Williams and Patsy Cline.

David is survived by his wife Roberta, son Brian Martinez of Moline, Illinois. Brother: Larry (Sue) Baker of Muscatine, sisters: Rosemary Beam  and Theresa Baker both of Coralville. Several nieces and nephews also survive. He was preceded in death by his parents and a sister Annette.

Share Your Memory of
David
Upload Your Memory View All Memories
Be the first to upload a memory!
Share A Memory
Send Flowers