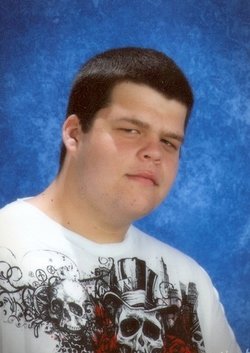 Please share a memory of Nikita to include in a keepsake book for family and friends.
View Tribute Book
Downey, Iowa Nikita S. Jamieson, 15, died with his mother Johnna Jamieson Saturday December 6, 2008 as a result of injuries sustained in an automobile accident near Downey. Funeral services for Nikita and Johnna will be held 11 A.M. Thursday December 11, 2008 at the Henderson-Barker Funeral Home in West Branch. Visitation for Nikita and Johnna will be held Wednesday from 4 to 8 P.M. at the funeral home. Burial will be in the Downey Cemetery. In lieu of flowers a memorial fund has been established. Nikita was born January 31, 1993 in Iowa City, Iowa the son of Kevin and Johnna Prevo Jamieson. He was attending West Branch High School where he was a sophomore. He was also working at McDonald’s in West Branch. He enjoyed listening to music, 4 wheeling, video games, cars, skateboarding, “girls” and loved animals. He is survived by his father Kevin Jamieson and his significant other Tammy LeMaster of Downey. Sister: Tuesday Jamieson and brother Isaiah Jamieson.
Wednesday
10
December

Share Your Memory of
Nikita
Upload Your Memory View All Memories
Be the first to upload a memory!
Share A Memory
Send Flowers
Plant a Tree