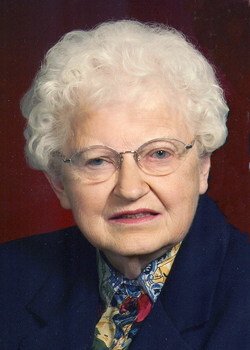 Please share a memory of Celia to include in a keepsake book for family and friends.
View Tribute Book
West Liberty, Iowa Celia M. Bjork, 82, died November 26, 2008 at Mercy Hospital in Iowa City following an extended illness. Funeral services will be held 10 A.M. Saturday November 29, 2008 at the First Church United in West Liberty. Visitation will be held Friday from 5 to 8 P.M. at the Henderson-Barker Funeral Home in West Liberty. Burial will be in the Oak Ridge Cemetery, West Liberty. In lieu of flowers a memorial may be made to West Liberty Fire and Rescue Unit or Friends of Library. Celia was born November 16, 1926 in Louisa County, Iowa north of Morning Sun the daughter of Roy and Mae Carlson Coon. She was a graduate of Morning Sun High School and Burlington College of Commerce. She was employed at the Des Moines County Social Welfare office as a secretary following completion of Business School. She was united in marriage to Howard Bjork at the First Presbyterian Church in Morning Sun on September 24, 1949. They had lived in Iowa City for several years where she was employed at the University of Iowa and Johnson County Social Welfare office until the birth of their first child. They moved to West Liberty in 1960 where she was employed as Administrative Secretary in the West Liberty High School Principal’s Office for 24 years retiring in 1990. Celia was a long time-time active member of the West Liberty First Church United; having served several years on the Board of Directors, Board Secretary, Board Treasurer, Board of Deacons, Liberty Crusaders, as well as U.C.W. and Whitacre Circle and other various committees and events. She was a Charter Member of the Friends of West Liberty Public Library and Treasurer of that group for 10 years. She was a member of the Fortnightly Literary Club and she and Howard volunteered in delivering library books regularly to the three local retirement buildings for several years. She also served as a volunteer at the Senior Meal Site and Simpson Care Center. Celia and Howard enjoyed traveling after retirement and visiting their children and grandchildren. Both were avid sports fans and attended their families events and activities as frequently as possible. She is survived by her husband, Howard of West Liberty. Four Children: Ed (Barb) Bjork of Mt. Vernon, Tom Bjork of West Liberty, Jane (Robert) Vimini of Salisbury, Maryland and David (Luann) Bjork of Kirksville, Missouri. Nine Grandchildren: Kim Bjork of Marion, Nick Bjork of Mt. Vernon, Kris Bjork of North Liberty, Curt Bjork of Mt. Vernon, Andrew Vimini, Megan Vimini and Molly Vimini of Salisbury, Maryland, Eric Bjork and Allison Bjork of Kirksville, Missouri. Also surviving are two nieces: Polly Fahlgren of Burlington and Bev Brauer of Maquoketa. Celia was preceded in death by her parents and a sister Marilyn Fahlgren.
Friday
28
November

Share Your Memory of
Celia
Upload Your Memory View All Memories
Be the first to upload a memory!
Share A Memory
Send Flowers
Plant a Tree