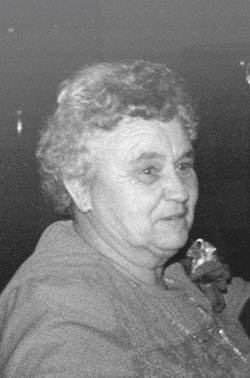 Please share a memory of Theresa to include in a keepsake book for family and friends.
View Tribute Book
West Liberty, Iowa Theresa F. Schaapveld, 81, died suddenly Friday August 19, 2011 at Mercy Hospital in Iowa City. Funeral mass will be held 10:30 am Tuesday August 23, 2011 at St. Mary’s Catholic Church, Nichols. Visitation will be held Monday from 5 until 8 PM at the Henderson-Barker Funeral Home in West Liberty where a rosary will be recited at 7:30 PM. Burial will be in St. Mary’s Cemetery, Nichols. Theresa was born March 5, 1930 in Sac County, Iowa the daughter of Eugene and Clara Hann. She was a graduate of Coon Valley High School. On September 7, 1963 she was united in marriage to Henry Schaapveld in Auburn. The couple had farmed in the West Liberty area for many years and most recently she was employed at the University of Iowa Hospital and Clinics in the housekeeping department until her retirement. She was a member of St. Mary’s Church and she enjoyed gardening, flowers, canning and was an incredible cook. She is survived by her son Henry Schaapveld of West Liberty and a sister Elizabeth Hann of Auburn. She was preceded in death by her parents, husband Henry in 1990 and a brother Joseph Hann.
Monday
22
August

Share Your Memory of
Theresa
Upload Your Memory View All Memories
Be the first to upload a memory!
Share A Memory
Send Flowers
Plant a Tree