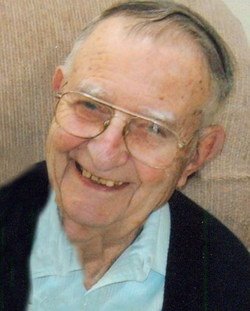 Please share a memory of Edmund to include in a keepsake book for family and friends.
View Tribute Book
West Liberty, Iowa. Edmund James Winfield, 92, died Wednesday July 13, 2011 at his home in West Liberty. Funeral mass will be held 1:00 P.M. Saturday, July 16, 2011 at St. Joseph Catholic Church in West Liberty. Visitation will be Friday from 5:30 to 8:00 P.M. at the Henderson-Barker Funeral Home in West Liberty where a prayer service will be held at 7:30 P.M. Burial will be in the Nichols Cemetery, Nichols, Iowa. Memorials may be made to Iowa City Hospice, West Liberty Rescue Unit or St. Joseph Church. Ed was born October 15, 1918 in Davenport, Iowa the son of Robert Edmund and Maud Isabelle Phillips Winfield. He was a Graduate of Davenport High School in the class of 1936. United in marriage to Luetta Pike on February 16, 1941 in Nichols, they were married 64 years. He served in the US Navy during WWII, serving a portion of his time on the USS Corridor a small aircraft carrier. Ed had been employed for a short time at Amour in Davenport before moving to West Liberty and opening Winfield’s Fine Foods which he operated for 25 years. He most recently was employed with Rohner Machine Works for 15 years. He was a devoted catholic and a member of St. Joseph Catholic Church, Lions Club, Rotary, a charter member of the West Liberty Country Club and Mansell Phillips American Legion Post #509. He was a devoted family man, enjoyed feeding birds and loved his country. He is survived by three daughters: Linda (Charles) Roe of Fulton, Missouri, Susie (Jim) Wieneke of West Liberty and Kathy (Morrie) Noble of Atalissa. Son: Edmund (Pam) Winfield of Burnsville, Minnesota. Five Grandchildren: Jennifer (Aaron) Stoker, Anna Roe, Matthew Winfield, Andy White and Melissa (Chris) Bunge. Five Great Grandchildren: Grace, Addison, Isabelle and Emma Bunge and Megan Lee Willier. Sister: Muffie McCubbin of Harlingen, Texas and numerous nieces and nephews. He was preceded in death by his parents, wife Luetta Ruth Pike Winfield, grandson Corey Lee Wieneke, Sister: Mary Hamilton, and an infant sister.
Friday
15
July

Share Your Memory of
Edmund
Upload Your Memory View All Memories
Be the first to upload a memory!
Share A Memory
Send Flowers
Plant a Tree