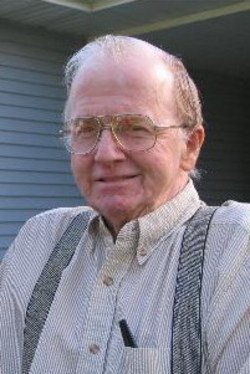 Please share a memory of Paul to include in a keepsake book for family and friends.
View Tribute Book
Paul Duane Heick, 75, passed away Friday August 29, 2008 at his home in West Branch surrounded by his family. Funeral mass will be held 11:00 A.M. Tuesday September 2, 2008 at St. Bernadette’s Catholic Church in West Branch. Visitation will be held Monday from 4 to 8 P.M. at the Henderson-Barker Funeral Home in West Branch where a rosary will be recited at 7:30 P.M. on Monday. Burial will be in St. Joseph Cemetery, rural West Branch. A memorial fund has been established. Paul was born February 11, 1933 in Tipton, Iowa the son of George E. and Thelma M. Morningstar Heick. He was a graduate of Tipton High School in 1951 and attended Iowa State University. On November 28, 1959 he was united in marriage to Margaret Kathryn Driscoll in Tipton. He was employed with Moore Business Forms in Iowa City for 29 years retiring in 1994. Following his retirement he was a crossing guard for the Iowa City School System. He was a US Army Veterans. He was a member of St. Bernadette Catholic Church in West Branch and the Moose Lodge. Survivors include his wife Margaret of West Branch. Six Children: Sandra Heick of West Branch, Kevin (Gina) Heick of West Branch, Mark (Shari) Heick of West Branch, Cindy Heick of Urbandale, Jim (Chris) Heick of Solon and Kathy Heick of Iowa City. 4 Granddaughters and 6 Grandsons. One sister: Bev (Floyd) Conner of Mediapolis and one Brother: George Jr. (Doris) Heick of West Branch. He was preceded in death by his parents, a granddaughter and a brother Leland.
Monday
1
September