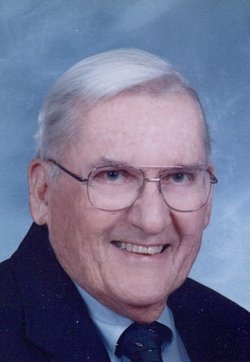 Please share a memory of Keith to include in a keepsake book for family and friends.
View Tribute Book
West Liberty, Iowa Keith Duane Christison, 83, died Monday, December 27, at Mercy Hospital in Iowa City. Funeral services will be held at 10:30AM on Thursday, December 30, 2010 at St. Joseph Catholic Church in West Liberty officiated by Father Dennis Martin. Visitation will be 4:00-7:00PM on Wednesday, December 29, 2010 at the Henderson-Barker Funeral Home in West Liberty. Burial will be in Mt. Calvary Cemetery in West Liberty. A memorial fund has been established. Keith was born May 27, 1927 in Walcott, Iowa the son of Roy and Nellie Bridgeford Christison. He graduated from West Liberty High School and later served in the U.S. Army during the Korean Conflict. Keith was united in marriage to JoAnne Sloan on February 8, 1953 in West Liberty. He was employed with the U.S. Postal Service, first with the railway postal service in West Liberty and later as a personnel manager in Iowa City. Keith was a member of the West Liberty Mansell Phillips American Legion Post 509 and the West Liberty Country Club of which he was a past president. He is survived by his wife JoAnne of West Liberty, sons James Christison of West Liberty and Dan (Judy) Christison of Moline, IL, and daughters Dianne (Bob) Hunter of Brunswick, OH, and Donna (Steve) Howe of Nichols, IA, grandchildren Sarah and Nick Christison, Rachel and Kyle Hunter, step grandchildren Charity (Josh) Holstein and Ben Reynolds, great grandson Greyson Alatalo, and brother Dale (Barb) Christison of Florida. He was preceded in death by his parents and brother.
Wednesday
29
December

Share Your Memory of
Keith
Upload Your Memory View All Memories
Be the first to upload a memory!
Share A Memory
Send Flowers
Plant a Tree