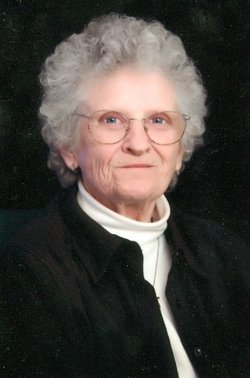 Please share a memory of Margaret to include in a keepsake book for family and friends.
View Tribute Book
West Branch, Iowa Margaret Kathryn Heick, 82, passed away Wednesday, August 26, 2015 at the Crestview Care and Rehab Center in West Branch. Funeral mass will be held 10:00 A.M. Monday, August 31, 2015 at St. Bernadette’s Catholic Church in West Branch. Visitation will be held Sunday from 2 to 6 P.M. at the Henderson-Barker Funeral Home in West Branch where a rosary will be recited at 6 P.M. on Sunday. Burial will be in St. Joseph Cemetery, Cedar Valley. Memorials may be made to West Branch Fire Fighters. Online condolences may be made to the family at www.hendersonbarkerfuneralhome.com. Margaret was born April 17, 1933 in Cedar Valley, Iowa the daughter of James and Agnes Baker Driscoll. She was a graduate of Springdale High School in 1951.On November 28, 1959 she was united in marriage to Paul D. Heick in Tipton. Marge was employed with K-Mart in Iowa City for 27 years. She was a member of St. Bernadette Catholic Church in West Branch, enjoyed bowling, playing cards, following her children and grandchildren’s activities and an avid Iowa Hawkeye fan. Survivors include her six Children: Sandra Heick of West Branch, Kevin (Gina) Heick of West Branch, Mark Heick of West Branch, Cindy Heick of Ankeny, Jim (Chris) Heick of Solon and Kathy (Tom) Trump of Solon. Four Granddaughters, five grandsons and two great grandchildren. Nine siblings: Rosemary Sexton of West Branch, James (Barb) Driscoll of Cedar Rapids, Patricia Knoop of Iowa City, Marcella Budreau of West Branch, Francis (Janet) Driscoll of Iowa City, Regina (George) Schreiber of Solon, Carol Moore of Lawrence, KS, Daniel Driscoll of West Branch, and Lorna (Michael) Fletcher of Tipton. She was preceded in death by her parents, husband Paul and a granddaughter Jenna.
Sunday
30
August

Share Your Memory of
Margaret
Upload Your Memory View All Memories
Be the first to upload a memory!
Share A Memory
Send Flowers
Plant a Tree