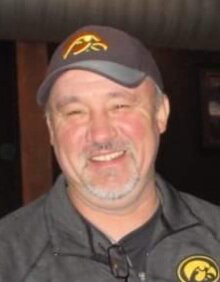 Please share a memory of John "Bubba" to include in a keepsake book for family and friends.
View Tribute Book

A celebration of life will be held 1 to 6 P.M. August 13, 2022 at the West Liberty Fair Midway Pavillion. The Henderson-Barker Funeral Home in West Liberty is caring for John’s family. Online condolences may be made to the family at www.hendersonbarkerfuneralhome.com. Memorial donations in memory of Bubba may be made to the Iowa City Animal Shelter.

John was born March 31, 1970, in Casa Grande, Arizona. He was a 1988 graduate of Industry High School, Industry Illinois and later Western Illinois University at Macomb, IL. John had been employed as Park and Recreation Director for the City of West Liberty and most recently at the University of Iowa.

John was an avid fan of Iowa Hawkeye sports and St. Louis Cardinal Baseball. He was a great cook, enjoyed NASCAR and was a friend to many.

Share Your Memory of
John "Bubba"
Upload Your Memory View All Memories
Be the first to upload a memory!
Share A Memory
Send Flowers
Plant a Tree