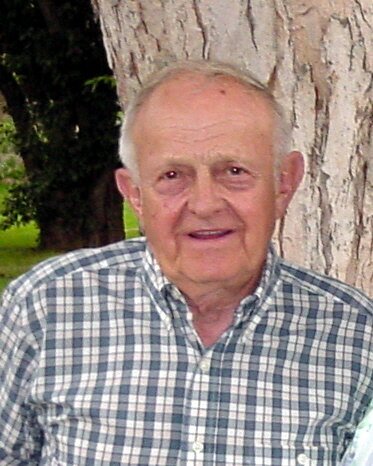 Please share a memory of Mervin to include in a keepsake book for family and friends.
View Tribute Book

A family gathering will be held at a later date with inurnment in the Nichols Cemetery. Online condolences can be made to the family at www.hendersonbarkerfuneralhome.com. In lieu of flowers, memorials may be made to the Nichols First Responders.

Mervin Edwin Mills was born on January 7, 1927 in Nichols, son of Fredrick and Odetta (Arnold) Mills. He was a graduate of Nichols High School and served in the United States Army from 1945 to 1947. On August 8, 1948 Mervin was united in marriage to Dorothy Lowe in Nichols. After his marriage to Dort, he moved his new family to Rock Island Ill and worked at the Rock Island Arsenal for several years. He would later return to the Nichols area and take up farming along with working at Mills Motor Co as a mechanic. In 1968 he began working at the HON Company in Muscatine, retiring in 1991.

Merv enjoyed working on and collecting old cars, tractors, and farm equipment. He especially enjoyed his 1941 Ford coupe along with his father’s 1949 Hudson and 1937 Allis-Chalmers WC tractor that was purchased new in Nichols.

He is survived by his wife of 73 years, Dort; four sons, Dan (Deb) Mills of Itasca, Ill., Doug Mills and Dave (Kim) Mills all of Nichols, Dick Mills of Longmont, Colo.; a daughter, Dee (Scott) McDonald of Abilene, Tx.; five grandchildren, seven great-grandchildren; two sisters, June Burr of West Liberty, Mary (Larry) Forbes Baker of Missouri, and several nieces and nephews. He was preceded in death by his parents, two brothers Kent and Wendall (Poody), a daughter-in-law Renee, and a grandson Austin.

A Family Gathering Will Be Held At A Later Date

Share Your Memory of
Mervin
Upload Your Memory View All Memories
Be the first to upload a memory!
Share A Memory
Send Flowers
Plant a Tree