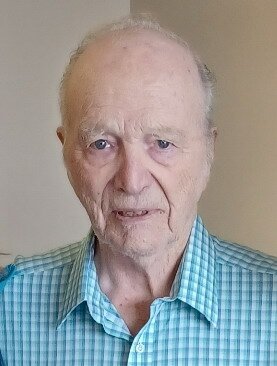 Visitation will be held 1:00 to 2:00 P.M., Sunday January 23, 2022 at the Henderson-Barker Funeral Home in West Branch, with services to follow immediately after at 2:00 P.M. Burial will be in the West Branch Cemetery.

The service for Jim will be livestreamed via the Henderson-Barker Funeral Home Facebook page at the following link:https://fb.me/e/1bJl728SF, beginning at 2 P.M.

Jim was born in South Rockwood, Michigan on December 29, 1927. As a teenager, his family moved to Brooklyn, Iowa where he graduated from Brooklyn High School. Jim joined the Navy near the end of World War II, where he served as a radar operator, and later as a printer. His tour aboard ship took him across the Pacific to Hawaii, Japan and the Far East. He visited Tsingtau, Peiping (now Beijing) and the Great Wall of China only a few weeks before the government fell to the communists who closed the country to the West.

After leaving the service, Jim worked at the West Branch Times as a typesetter. While playing in a fast-pitch softball game in West Branch, he happened to strike up a conversation with an attractive spectator. She was Florence Christensen, who would soon become his lifelong love and wife of 58 years. After building a Capp home on their North Downey St. property, they lived for many years in West Branch while Jim worked as a linotype operator for the Iowa City Press-Citizen and later as proprietor of his own print shop. He was always a hard worker, and often worked extra hours at the Daily Iowan and Economy Advertising to provide for his family. Jim and Florence had five children. The family had many memorable camping and fishing trips.

Jim was an avid card player, enjoying euchre, pinochle, and bridge, which he called “the best card game of them all.” He also enjoyed bowling, country music, the simple pleasure of long car trips, and watching West Branch Bears sports. Jim was a member of the Bethany Lutheran church in West Branch.