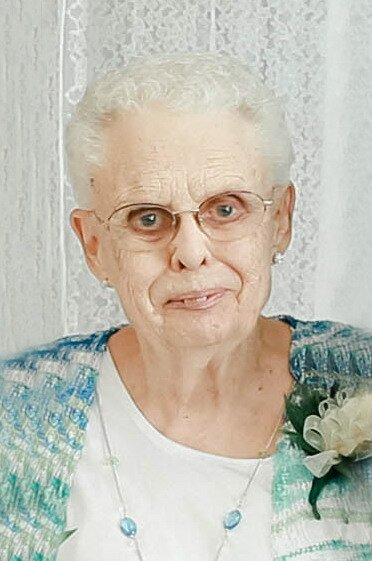 Please share a memory of Marilyn to include in a keepsake book for family and friends.
View Tribute Book

Marilyn M. Nebergall, 90, passed away Friday, January 14, 2022, at Prairie Hills Assisted Living in Tipton where she had recently resided.

Visitation will be held 10 to 11 A.M., Monday January 17, 2022 at the Henderson-Barker Funeral Home in West Liberty, with services to follow immediately after at 11:00 A.M. Burial will be in the Pee Dee Cemetery, Springdale. A memorial fund has been established.

Marilyn Mae Beach was born December 24, 1931, the daughter of Howard and Mae (Hamilton) Beach. She was a graduate of West Liberty High School. On December 16, 1962, she was united in marriage to Hilbert Nebergall in Atalissa. Marilyn and Hilbert farmed together in the area all their lives.

She was a diehard Chicago Cubs fan, enjoyed following the Iowa Hawkeyes and was very active in following and attending her grandchildren's activities.

She is survived by her two children: Son: Brian (Debra) Nebergall of Muscatine, Iowa; a Daughter: Robyn (Ron) Woeste of Atkins, Iowa; two Grandchildren: Nathan (Madison) Woeste of Columbus, Ohio and Lauren Woeste of Atkins. She was preceded in death by her parents, husband Hilbert in 2002 and a sister Sandra Murdock.

Share Your Memory of
Marilyn
Upload Your Memory View All Memories
Be the first to upload a memory!
Share A Memory
Send Flowers
Plant a Tree