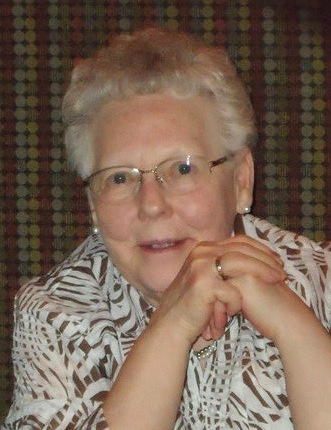 Rose was born on October 5, 1930 in Humboldt Iowa, the eldest daughter of Ralph P. and Mary Bernice Callahan Sorensen.  She was a graduate of Sacred Heart High School, Tobin Business College and attended Fort Dodge Junior College.  She married Gerald E Carlson in 1950.  She was affiliated with Wilson Accounting in Wapello, Iowa for ten years and then joined Louisa Publishing for twenty years retiring in 1995.

She was a member of St. Joseph Catholic Church, West Liberty, Chapter ET of P.E.O., Chapter G of TTT and the Wapello Study Club.   Rose was a long time, quiet volunteer in the Wapello community.  She served on the Resident’s Care Committee as Secretary of the Trustees for the Wapello Nursing Home, Secretary of the Keck Memorial Library Board of Trustees, helped organize and served as an officer on the Friends of Keck Board, served as a Social Security Representative Payee and on the Food Pantry Board.  Rose was also a supporter of other civic organizations in Wapello and Louisa County.

Survivors include two children and spouses, a son, Gary and Sheryl Carlson of Muscatine and a daughter, Sharon and Mike Duytschaver.

Other survivors include: a brother in law, Elmer Kolnes, many nieces, nephews and special friends. She was proceeded in death by her husband in 1983, her parents, parents in law, three sisters and one daughter in law.

Per Rose’s request, there will be no formal service. A family graveside ceremony will be held with burial in North Lawn Cemetery in Fort Dodge, Iowa.  Memorials may be made to Keck Memorial Library in Wapello, Wapello Fire and Rescue Department or a local food pantry.