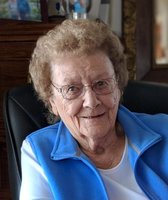 Marie Anderson, 94, passed away Thursday, June 18, 2020 at the Crestview Specialty Care Center in West Branch. Graveside services will be held 1:30 P.M., Tuesday June 23, 2020 at the West Branch Cemetery. Online condolences may be made to the family at www.hendersonbarkerfuneralhome.com. Memorials may be made to the Accessibility Project at the West Branch United Methodist Church. Marie was born January 7, 1926 near West Liberty the daughter of Clark and Helen (Schiele) Wolf. She was a graduate of West Liberty High School in the class of 1943. Following high school she taught country school South of West Liberty for 1 year. On June 25, 1944 Marie was united in marriage to Richard Anderson at the United Methodist Church in West Branch. Marie was a busy mother in addition to helping her husband Dick on their farm near West Branch. They were active members of the community. She was a great cook, her children and grandchildren remember her for many of the things she made, especially her cinnamon rolls. She was an avid Iowa Hawkeye Football and Basketball fan attending games for many years. Survivors include her four children: Rick (Carole) Anderson of Cedar Rapids, Barry (Carolyn) Anderson of West Branch and Dean (Elaine) Anderson of Tipton, Julie (David) Sinclair of Lee’s Summit, Missouri. Nine grandchildren: Heath, Blake, Kalle, Duston, Kirk, Clinton, Katrina, Seth, Benton and nine great grandchildren. Also surviving are a brother Charles (Janet) Wolf of Iowa City and sister Dolly (Harvey) Parker of Stephenville, Texas. She was preceded in death by her parents, husband Richard in 2015, sisters: Eleanor Shoemaker, JoAnn Moehl and a brother Wayne Wolf.