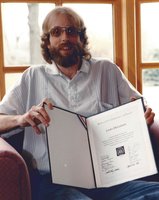 A celebration of life will be held 3:00  PM Thursday, October 6, 2022 at the Hoover Presidential Library in West Branch. All are welcome to attend and celebrate Jim’s life.

Jim Elmer Detlefsen of West Branch, IA died surrounded by family on Monday, February 24, 2020, due to complications from sepsis at the age of 59.

In lieu of flowers, please send donations to the Hoover Presidential Foundation at www.hooverpresidentialfoundation.org. Condolences can be sent to https://hendersonbarkerfuneralhome.com/tribute/details/835/Jim-Detlefsen/obituary.html.

The Henderson-Barker Funeral Home in West Branch is caring for Jim's family.

Jim was born on April 10, 1960, in Clinton, IA to Elmer and Maxine Detlefsen. He was born two months premature, weighed three pounds, and spent the first two months of his life in the hospital. At two years old, he was diagnosed with cerebral palsy. Jim spent part of his formative years at the University of Iowa Hospital School, learning to walk with braces and crutches. Thanks in part to the services of the Hospital School, Jim was able to live a full life.

During high school, Jim started volunteering at the Herbert Hoover Presidential Library and Museum in West Branch. When he turned 18, the Library gave him his first part-time job, as an Archive Aide, primarily doing darkroom work—creating copies of archival photos upon request. Jim was a dedicated employee: he rarely took days off and walked to work, declining to accept rides, no matter the weather.

In 1987, Jim was promoted to Archive Technician. He always had a knack for working with computers, so much so that he eventually became the Library’s Computer System Administrator.

In 2005, the Archivist of the United States Allen Weinstein presented Jim with the "Outstanding Contribution to NARA” (National Archives and Records Administration) award for his many years of service and support to the Library as its Computer System Administrator, noting that Jim “sets aside his personal needs to assist others with any and all audio-visual needs and stands by to ensure that everything is working properly.” After a fulfilling 37 years at the Library, Jim retired in 2015, at the age of 55.

Jim was a dedicated blood donor, giving nearly seven gallons before he had to stop due to his own health. Jim also loved watching the University of Iowa sports and beta testing the latest Microsoft programs on his state-of-the-art computers.

Jim deeded his body to the University of Iowa Carver College of Medicine for scientific purposes. Upon their return, Jim’s cremains will be interred at Springdale Cemetery in Clinton, IA, in the Detlefsen family plot.

The family would like to thank the staff at Allen Memorial Hospital and Unity Point Hospice in Waterloo for their help in Jim’s hospice care and the staff at Deery Suites at Western Homes Communities, Jim’s nursing home in Cedar Falls.